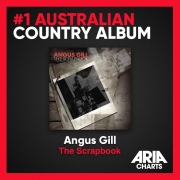 It’s been a big couple of days for Angus Gill off the back of the release of his brand new bluegrass album, “The Scrapbook”.

“I’m so excited and grateful to have a number one album with The Scrapbook. My first ARIA number one at that too, so it especially means a lot to me”, said Angus.

“Thanks to everyone who has bought a physical copy or has been streaming the album on the various digital platforms – I really appreciate it!”

“Not only were we swimming against the tide releasing this album through a global pandemic, but we also rescued the hard drives which thankfully were not damaged by the terrible floods in late March this year”.