Track 1: Welcome To My Heart

I was having a conversation with Lisa Loeb in Carmel CA about the fact that there aren’t enough platonic love songs being released in the current environment, songs such as Stand By Me and You’ve Got a Friend in Me. I was in Nashville the following week, writing with my friends LaLa Deaton, Blue Foley and I think it was Blue who had the title Welcome to my Heart. The title sparked my interest and I thought about what it meant to me, and my family came to mind. We wrote the song by thinking of all the things that we do on a perfect Sunday, at home with the family.

My Mother has always called me Last Minute Larry, because as much as I am the first one out of bed, I’m usually the last one out the door. I try to cram as much as I can into the 10 minutes I have spare, before I leave the house, and I always end up sending texts like, “so sorry I’m running about 5 mins late, traffic is terrible.” Which is exactly what I was doing when I went to write with my mate Bill DiLuigi in Nashville, except the twist was. “It’s actually quite fitting because the idea I’d like to write is called Last Minute Larry.” In this song, the protagonist finds that his lateness is ultimately his advantage.

I spent 2 months over in Nashville in 2018, writing 2-3 times a day, and I wrote exactly 52 songs while I was in town. I had a writing session with a great singer/songwriter Lance Carpenter and I had this title in the back of my head called Origins. I was thinking back to my childhood memories and the house that I grew up in, the abundance of photo albums showing me learning to play guitar, the mini concerts I held in the backyard, tearing up Dad’s lawn on the PW50, getting my hands dirty building our herb garden and repairing the chicken pen when the foxes got too close. That’s the genesis, the foundation, the fabric of my existence, it’s where I come from, it’s my Origins.

Besides playing music when I was growing up, I had a strong interest in radio, as my Nan was a secretary at my local community radio station 2WAY FM in Wauchope. At 14 years of age, I learnt how to work the panel and they gave me my own show on a Sunday afternoon from 4-6pm called The Local. One of the first artists I discovered as kid was the legendary Graeme Connors and I would often play his music on my show. Graeme was coming to town to do a show and I asked his management if I could interview him, and I got the interview. They gave me tickets to the show and I got to meet Graeme at the end. He told me that I could call him up if I ever had any questions about the music business. Years later, I saw him at the Golden Guitar Awards and we reconnected. GC and I have written a few times now and it’s a privilege to call him a friend and a mentor.

Track 5: Fly on the Wall

I met the legendary writer John Scott Sherrill in Nashville, through Gina Jeffreys and Rod McCormack, who was playing a round with John Scott at the iconic Bluebird Cafe. John Scott agreed to write and told me to meet him at the only tavern in Music Row, Bobby’s Idle Hour at 3pm on a Friday. I saw him out the back in the parking lot and he said that he was going to take me to his friend’s publishing house to write, but would I mind doing it right here. In the parking lot, with all the crickets and the squirrels and the frogs. We wrote Fly on the Wall in an hour and walked straight inside to try it out on an audience. It just happened to be the 70th anniversary of the Idle Hour and they were having a big celebration. You can’t get any more Nashville than that!

I was touring over in Tasmania last year with my friend Emma Jene, and in between shows, we went to the Museum of Old and New Art (MONA) in Hobart. The building and the exhibitions were very impressive, however one piece of futurist art caught my eye, which was titled Cornerstone. I thought about it and what it meant to me, then I thought of my Mother. Mum is like the cornerstone of the family household and the family business. No matter how busy she is or how much she has on her plate, she always keeps it all together.

My great Grandfather Roy Rousell lived to be 103 years of age, he was driving up until he turned 100 and still living in the house that he built to raise his family. He was quite the legend, the first cricket player to score a run, boundary and half a century at Monash Park in Sydney. He also dabbled in music and was my closest musical connection in my family (skipping 2 generations). He played the mandolin and I still have his beautiful instrument hanging up in my studio. I interviewed him on radio some years ago, and I asked him what his key to longevity was. He replied, “I don’t drink, I don’t smoke and I stay away from bad women.” I thought, there’s definitely a song in that.

I grew up listening to James Blundell’s music, and when I was on radio, I had the opportunity to interview him and hang out backstage before his show at the Wauchope RSL Club. I wrote a song with Matt Scullion a few years ago, which was about spirituality and the things that we believe in, regardless of what our religious views may be. I thought it would be a good duet song, and when I was producing the album, I got in touch with James and I’m very grateful that he agreed to sing it with me.

I spent a few days up in the Blue Mountains writing with Allan Caswell last year, we’d already got a few songs in the bank and it seemed as though a drinking song was coming on. But this one was not going to be any drinking song, it was going to be an Irish drinking song. When it came to producing the track, I got in touch with an incredible multi-instrumentalist John Mock, who plays with Dolly Parton, amongst others. I asked John if he could play a tin whistle part on the song and not only did he do that, he did it in full 4 part harmony.

While I was over in Nashville, one of the worst droughts Australia had experienced was devastating the country. Farmers crops were dying, they had to sell off livestock to be able to feed the remaining herd, and I felt I needed to write a song for the farmers. I teamed up with Terry McBride (Brooks & Dunn, McBride & The Ride) and we wrote this song for anyone out there who is doing it tough.

Family is so incredibly important to me. Nothing beats the feeling of coming home to them after being out on the road for weeks at a time. Both my Nan and my Grandma have been hugely supportive of me, and I have always been very close to them. Recently both of them were diagnosed with Alzheimer’s disease. There’s been much sadness and distress in having to put my 71 year old Nan into a nursing home and watching my Grandpa struggle every day with looking after my Grandma at home. I used to play a game of Gin Rummy with my Grandma at any chance I had. Shortly before her diagnosis, I tried to have a game with her and she was starting to get confused and embarrassed by her confusion. It was very difficult to see her like that, and ever harder watching both of my Grandparents deteriorate right in front of our eyes. Writing this song has been my way of trying to come to terms with this terrible disease, and it has connected me with other people who are going through the same thing with their loved ones.

This song was inspired by a corny high school experience that I had with a girl, but I knew it would lead to a good idea for a Country song. One thing I love about classic Country music, apart from having a strong narrative, is the word play in the lyrics, it makes people think and it changes their perspective. I had a writing session with hit songwriter Jerry Salley and I knew this was the right idea to write with Jerry.

Track 13: Looking in the Mirror

Having two teenage siblings, I notice the daily pressure that they face to look and act a certain way. Living in such a digital era, it is so easy to compare the unedited version of yourself, to the edited appearance and lifestyle of other people. Young girls and boys feel as though they need to alter their appearance and their behaviour in order to feel worthy and accepted. This is my song that says, you are already worthy and I see it.

When my creative brain is ticking over 24 hours, 7 days a week, sometimes I kinda get a little sidetracked. I go to write a setlist and end up writing a song. Yes, it’s happened! I wrote this song with Joe Robinson, who has been living over in the States for 10 years now, playing with the likes of Emmylou Harris and Rodney Crowell. We’re both from the Mid North Coast of NSW and it was great to reconnect in Nashville and write this song. When Joe came home in January, he stopped by my studio in Wauchope to record a rip roaring guitar solo and guitar parts for the album.

For further information, or to arrange an interview, please contact: 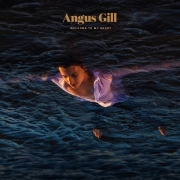 Angus Gill new album Welcome To My Heart out today!

Angus Gill new album Welcome To My Heart out today!